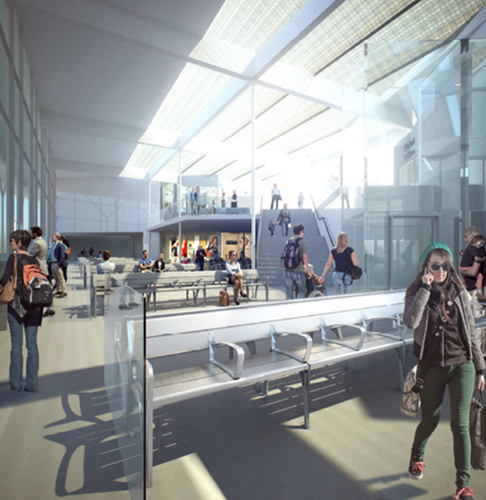 Outline blueprints for Dudley’s proposed new £18 million bus and tram interchange are set to go before planners this week.

A final decision will be made by the authority’s development control committee.

The application has been submitted by Transport for West Midlands, which is part of the West Midlands Combined Authority (WMCA).

As part of the plans, the partly vacant Co-Operative and Farm Foods store would also be demolished, as well as a former photography studio and warehouse unit in Birmingham Street.

The site is in the Dudley Conservation Area – but a report due to go before the committee says Historic England have no objections. It says: “The buildings proposed for demolition are significant negative visual elements in the conservation area that do not contribute to its significance or provide a good quality setting for Dudley Castle and St Edmund’s Church. No objection is raised to the principle of their demolition.”

The report says the new interchange will link up with the multi-million Metro Wednesbury to Brierley Hill line extension, which will run through the town centre. Planners say it will also open up Birdcage Walk, which is “dominated by a number of empty retail units”.

The report concludes: “The principle of the redevelopment and the extension of the bus station is considered to be acceptable in that it would accommodate an interchange with the Metro and act as a catalyst for regeneration in the town centre.”

"The bus station is the second busiest in the West Midlands by passenger numbers.

This could be another major step forward in terms of improvements in local transport and connectivity for Dudley and for the general regeneration in the town centre.

That’s why we have been pushing the WMCA to get the plans drawn up as quickly as possible and it’s great they are now on the table for consideration.”

The plans are set to go before the council’s development control committee at a meeting on Tuesday (Mar 5) at Dudley Council House from 6pm. Members of the public are welcome to attend.