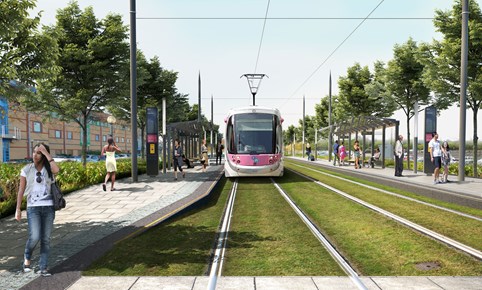 Multi-million pound plans to bring Metro through Dudley borough has today been hailed a “trailblazer” as the £449million funding for the rail scheme was given the green light.

The West Midlands Combined Authority gave the final go-ahead for the cash to finance the Wednesbury to Brierley Hill rail link.

This highly anticipated project, will link Dudley with Birmingham, Wolverhampton and the national rail network. Work will start later this year in Dudley on the scheme which is projected to trigger 2,000 new homes a year, almost one million square feet of prime commercial space and 34,000 permanent jobs.

The increase in the number of people paying council tax from the extra new homes that could be built is also estimated to bring in £580million, giving vital funding to local services. It will also improve connectivity to the DY5 business and innovation enterprise zone at Waterfont in Brierley Hill, as well as linking in with the planned multi-million pound transport interchange in Dudley town centre.

The Wednesbury to Brierley Hill route is being planned, designed and delivered by the Midland Metro Alliance, on behalf of Transport for West Midlands (TfWM), which is part of the WMCA.

TfWM has started a feasibility study to investigate what mode of transport will best link Brierley Hill to Stourbridge – whether that be rail, light rail, Metro or bus – to further improve connectivity in the borough.

Once up and running there will be up to 17 new stops along the 11 kilometres of track. The new system will also reduce journey times by half compared to travelling by bus.